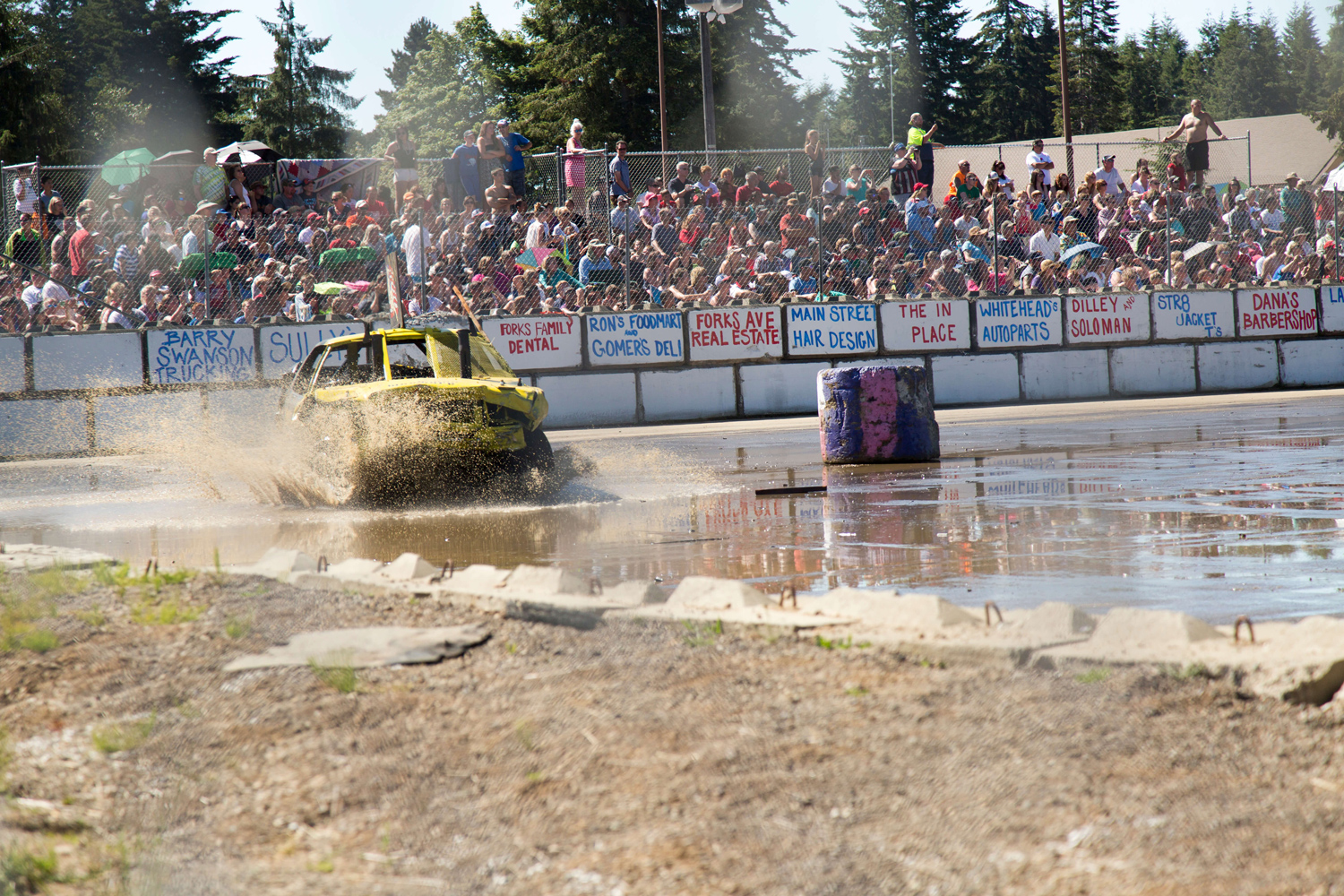 We stopped at a fuel station in Clallum Bay, Washington because Falkor was thirsty and Jessica needed a restroom. We were traveling with two guys, Dan and Ben, who were driving a Ford Ranger on a spare tire. They’d punctured a tire on a trail the previous day, and these gents, god bless ‘em, didn’t know how to plug a tire, so, I figured I’d show them how it’s done. They were about to embark on a cross country road trip and plugging a tire is one of those things any committed roadtripper should know how to do. Little known fact, that was about the most advanced repair I knew how to do at the time.

I went through the procedure with them, their heads nodded in approval and understanding and we then proceeded to fill the tire with air. Nothing. The tire kept hissing like a pissed off alley cat. A little more inspecting revealed a 2” long gash in the sidewall that proved impossible to plug. Lesson and tire done.

It was the 4th of July and though we were on the Olympic Peninsula of Washington and near the Pacific Ocean, the day was hot and my brow sported the not very sexy look of sweat beads and moistening hair. Gross. My mouth was longing for the cooling sensation of some liquid, and water just wouldn’t do in this heat. I needed Blue Powerade because advertising has conditioned me to need it and because it fills me with electrolytes, power, energy, strength, sugar and weirdly, more thirst. I sauntered into the convenience store where much to my dismay they only had Gatorade which is a cheap knock off of Powerade.* I begrudgingly snatched the Gatorade off the shelf, and with dreams of beverage imparted super powers quickly fading I made my way to the cashier. There I discovered a young woman with more gaps in her mouth than teeth and she had the complexion of someone who is a casual meth user flirting with addiction.

Cherohala Skyway and Beyond

Got it. Right. The 4th of July. The day a bunch of Americans celebrate their liberties by pretending they don’t live under the largest, most advanced surveillance state in history. Hamburgers and Fireworks are the American equivalent of Rome’s Bread and Circuses. Distractions.

I proceeded to tell Jessica about the demolition derby and whether she’d be down for going.

“Whatcha got planned today? Anything special?”

“Probably going to head to Dungeness Forks to camp.”

“Forks, huh? You going to the derby?”

The derby? I was confused. Dungeness Forks is a forest on the east side of the Olympic Peninsula with gorgeous views, awesome camp spots and positively no derbies.

She proceeded to inform me that the city of Forks, Wa. was having its annual 4th of July Demolition Derby and admission was free.

“Yes, sir. Starts at 3 o’clock. My boyfriend is one of the drivers and…”

I half stopped listening as I began to imagine how rad a demolition derby must be to see in person. I paid the cashier for the Not-Powerade and briskly made my way to the van where I proceeded to tell Jessica about the demolition derby and whether she’d be down for going.

“Hell yes! As long as Dan and Ben want to go, I’m totally down.”

I ran over to the homies and inquired as to their level of interest in attending a free derby. They too were into it, and so it was on. With the van fully topped off, we headed west towards Forks: home to a bunch of Twilight movie series tourist traps and now a demolition derby.

Lifted trucks with stickers on the rear windscreen of Calvin pissing on one thing or another peppered the parking lots and street shoulders. Sugar-Addled-Runt-Shuttles (Mini Vans) were not in short supply along with the normal sedans and soulless cars one sees everyday but never notices parked interspersed among gaudy back-woods mobiles and old RVs. It was hot and a bit humid. The air smelled of cotton candy and redneck. In case you’re wondering what redneck smells like its a combination of stale funnel cakes, cheap leather and cigarettes.

A sea of people streamed in the same direction, undulating in waves of tall and short, skinny and fat, old and young all moving like a current towards the main attraction. The fine citizens of Forks were dressed in their finest patriot gear. American flag shirts, POW/MIA tank tops, Stars and Stripes daisy dukes with a side of butt cheese peaking just beneath the frayed bottom edge. American flags littered the scene. America the Beautiful. What a mess.

I’ve seen demolition derbies on TV before but never spent much time watching. I’d mostly catch glimpses of them while flipping through channels. Mangled messes of metal on wheels lurching and lunging towards another amalgam of what was once a showroom ready vehicle. Mud would sling up and rooster tailed behind the rear wheel drive cars. The people in the stands looked like the same ones you see on USA Wrestlemania or the ones you see at in Dollywood or Forks, Washington on the 4th of July. I could just begin to get a whiff of the stale funnel cakes before flipping the channel.

This derby was not in a muddy arena but on a square slab of concrete surrounded by concrete barriers and high chain link fencing. I was only a little disappointed as I had wanted to see the scenes I’d seen on TV play out in front of me but I was content to be there nevertheless.

We walked to the entrance where a native woman was taking tickets from the people in the queue.

Tickets? We need tickets?! I thought to myself, embarrassed and a little flustered.

I bet I sounded like a petchulant child pleading his case to stay up later than bedtime by pretending to be hungry.

My compatriots all looked at me and my embarrassment grew a little sort of like the Grinch’s heart did when he discovered how not to be a dick. $10 it was and we handed over the cash just as I was beginning to remember my gas station interlocutor a little less fondly.

Kids were everywhere, cheap beer was being guzzled by parents, cans of the stuff peppered the grounds. There were scantily clad, methy looking girls wearing trucker hats with their “better” half sporting a t-shirt-converted-to-a-tank-top lounging about in folding camp chairs. All of us were united in anticipation for the metal gladiation to begin. Firefighters wet down the concrete slab to make the concrete slippery. Speakers blared Ozzie Osborne and AC/DC and Led Zeppelin and all those other bands you’re guaranteed to hear if you walk into nearly any mechanic’s garage across America.

Just then the scent of cheap leather and aged cigarettes gave way to the perfume of burning petrol being carried on the breeze. I could detect a hint of burning tranny fluid with a tinge of Castrol motor oil and the sweet scent of seething coolant being wafted in our direction. It smelled of American muscle. Ozzie Osborne turned into growling and grunting V8s each making their way onto the slab before us. One was painted like the Batmobile, another like a WWII P-57 fighter baring its teeth, and there was a General Lee complete with the flag of the Confederacy and Dixie horn. All were heavy steel, lumbering jalopies that made their entrance felt by revving their barely functional Detroit V8s passed redline.

With the vehicles lined up before the crowd, a few words of thanks were said to veterans and their fallen comrades. We were asked to stand, remove our hats and listen to some poor soul howl the National Anthem.

Oh say can you see.

She sang it acapella.

By the dawn’s early light

Do I really need to stand up?

What so proudly we hailed

Hat off? This is silly.

At the twilight’s last gleaming

Through the perilous fight

Man, she is really off key

With the anthem finished, a yell went up from the crowd, no doubt feeling the same nationalism and pride one feels after voting. The hollering faded into Ozzie Osborne’s Crazy Train. The jalopies on the slab took their mark. They made ready. A horn blew. A mess happened.

I was giggling like an 8 year old boy after launching a deep, bassy fart. I shook with excitement marveling at the hilarity of the spectacle before me. One of the cars got pinned against a concrete barrier. That poor bastard. And with him stuck, every other car still in the fight did the crowd a favor and lined up at the opposite end of the slab, mashed the accelerator, and approached ramming speed just before literally plowing into the immobilized car. One after another performed this Holy Sacrament, they did their patriotic and civic duty until thick smoke filled the air, until most of the cars were too dilapidated to continue, until tires divorced themselves from rims, until engines died, until cars drove on rims, until sparks shot up into the air, until steel littered the arena.

O’er the ramparts we watched were so gallantly streaming.

America the Beautiful. What a mess.

*Powerade clearly knocked off Gatorade a long time ago in an age known as 1988.