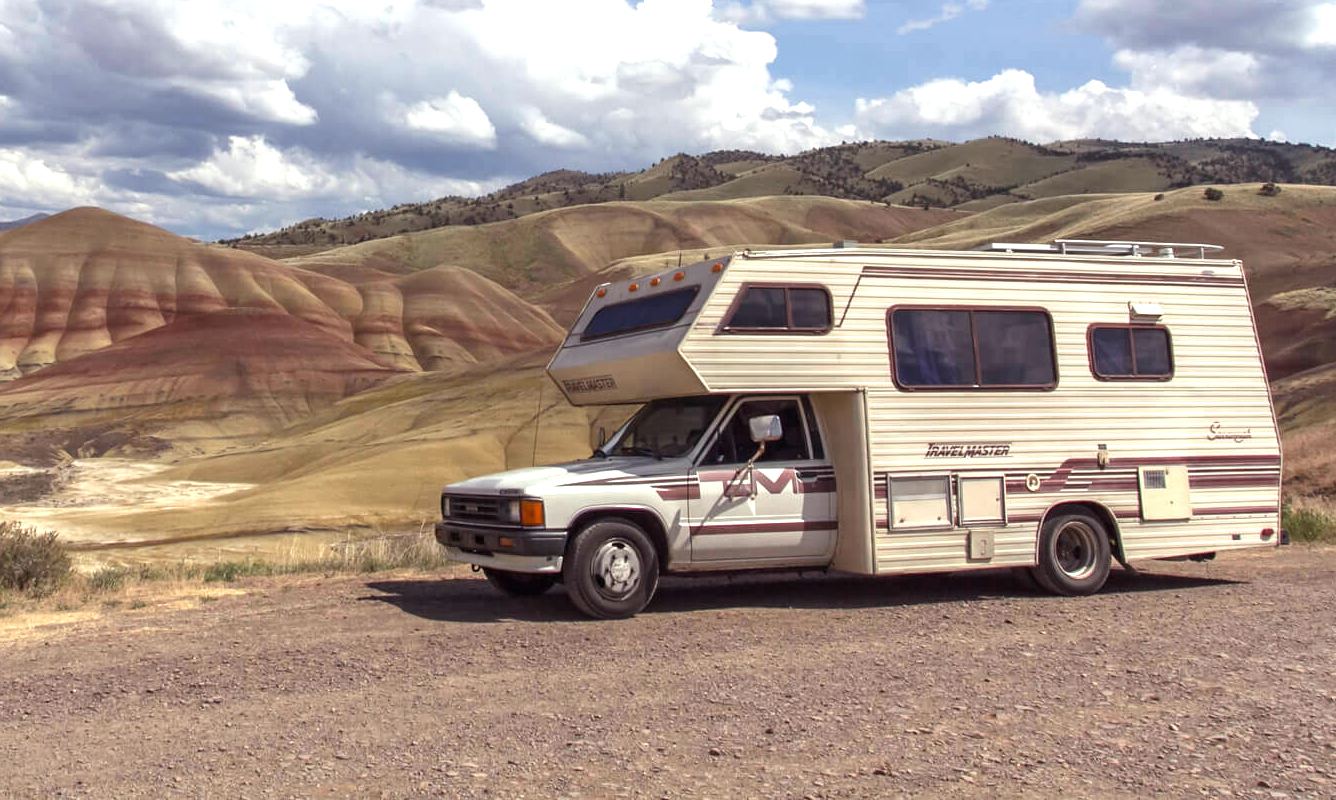 We met Tricia and Cody in March of 2016 when we all happened to be visiting Austin, Texas. They’re a couple enamored with life on the road and with each other. Like other overlanders, they’ve met the challenges of living on the road head on with the necessary can-do spirit that seems to inhabit all who take on this lifestyle. We are grateful they took the time to answer our questions so thoughtfully. Take it away, Our Wandering Rhythm!

We’re Cody and Tricia Pickren and we’ve been on the road since August 2014.

Tricia: I’m sort of from all over—born in CT, grew up in Ohio, lived in Idaho, Mexico, and Michigan, so yeah, I don’t really know where I’m from.

What do you do for work?

Last year, Tricia was working remotely as a digital marketing manager while I did a combination of freelance writing, IT consulting, and odd jobs. Since I had to have knee surgery last year, we realized that this wasn’t going to be enough,so we are currently in Austin to work for a bit. Tricia now works for StitchFix as a stylist, and I founded a startup as well as working for WordPress Engine as a support engineer. Tricia’s job is remote again, and I’m working towards the same goal with mine.

This is hard to pick (life on the road is full of laughable moments), but the one that comes to mind first was Cody taking a bath with a snake. Tricia finds this much funnier than Cody.

Cody: We drove out to the river and some public land in Colorado to camp on our way through the state. On the way in, I had to straddle a big old rattlesnake coiled dead-center in the middle of a sunny dirt road. I held my breath and Tricia hollered ‘snake’, but Harvey cleared him safely. That was my warning. We made camp in a rocky pull-off and Tricia whipped up a stew for dinner while I got out my fiddle. The bugs drove us inside early. The next morning, I went down to the river, and as I was sitting in the water, Tricia walked down to the bank and immediately froze.

“Don’t move!” she cried.
“What?” I said, thinking she’d almost stepped on a snake.
“That rock right in front of you, underneath it. Something moved.”
“Ah, that’s no big deal. It’s probably just a crab or something.”
“No, it was a snake. Oh look there it is!”

At this point, Tricia says I yelled, but I don’t remember. I do remember a flat-headed snake waving gently towards me under the water. It was all moving a little fast, but next thing I knew, I’d jumped clear to dry land and the safety of the riverbank. I decided I could come back for my soap the next day. We slowly worked our way through the rocks back to Harvey, worried there might be more. There was no sign of any snake when I went back for my abandoned soapbar where I’d left it balanced on a rock, and we drove off having a good laugh at Tricia’s reenactment of me jumping out of the water.

Cody: This one’s a hard question for us. We didn’t have much going for us mechanically our first year, but this past winter’s health situation took the cake. Having just completed a grueling summer of knee surgery rehab and overhauling Harvey’s floor(our 1987 Toyota Travelmaster), we were excited to be back in motion. It didn’t last long though. We meandered from Michigan to Arizona for a gig and were just feeling back to normal when my knee cartilage re-tore. Because of the way our insurance worked, we had 3 days to go straight back to Ann Arbor for surgery before our deductible reset and cost us thousands. Compounding the toughness of planning an impromptu two thousand mile drive, we were driven out of our desert campsite by a flash flood that night.

We meandered from Michigan to Arizona for a gig and were just feeling back to normal when my knee cartilage re-tore.

The choice boiled down to an hour just to get back to town and find somewhere to sleep or just start driving back north, so we went for it. I drove through until we stopped for a late brunch the next morning somewhere in New Mexico or West Texas. When I say brunch, this wasn’t a luxurious gathering for breakfast tacos and mimosas. Tricia, (somewhere in between navigating, coordinating with my doctors and working) managed to come up with an amazing egg and avocado breakfast though and we pretty much lived on that for the next two days as we drove into the first snowstorm of the year. By the time we hit Oklahoma, temps had dropped into freezing and we were afraid to shut Harvey off since he was full of extra-heavy oil for the desert, so we upped the pace. Because of the insurance, instead of finding a nice campsite and running the heater, we piled on as many layers as we owned. Spooning for extra heat, we snatched naps in truck stops and gas stations, Harvey a miniaturized caricature next to the big rigs idling in rows. The rest of the Midwest flew by until we started hitting snow in Indiana. From that point forward, it was a white-knuckled twenty-four hours driving through ten inches of snow and ice as the roads froze over. Hanging out in the right lane at 55 mph got us home safe and sound though. By the time we made it to stay with our friends in Detroit, we were frozen stiff and exhausted. Stepping inside a warm house was an experience in gratitude made new all over as our bodies unbent and thawed. That night as we shed our insulating layers, Tricia bundled in successive sweaters like a matryoshka doll, we didn’t realize how much those three days forced us to grow, but when I looked in the mirror the next morning, a patch of my beard the size of this capital “O” had turned pure white, so I know I must have built some character.

We can’t think of one particular conversation that’s done this, but our perspective of people’s kindness certainly did shift after being on the road for a while. We really weren’t expecting all the wonderful people we met. Every time we’ve gotten stuck from a dead battery or with expensive repairs, the people in our path have gone out of their way to be helpful and compassionate. Of course, there are terrible people in this world who do awful things, but it’s been nice to be reminded that there are also a lot of people who are ready and willing to be friendly and help others. It’s also made us far more mindful of how we treat other people!

Right now we’re in a season of being off the road and are in Austin, TX for a bit while we work on strengthening our remote job skills and save up for a van. We like the balance that being on and off the road for periods of time brings us. But if we had to pick somewhere to actually settle, we’d probably choose Portland, Oregon (you know, for a year or two).

One of the best things about #vanlife is community and meeting new people wherever we go, is letting local culture dictate the best way to experience an area. Sometimes though, we like to point Harvey into the wilderness and spend some time by ourselves for a few days in the middle of nowhere. There was a two month stretch one winter where we’d unplugged to focus on meditation, but no matter where we went, we attracted dirt-bikes and 4×4’s! To this day, a two-stroke engine revving makes us want to jump in the car and drive away.

Cody: I would have a cat who’d ride on my shoulder because I had one who did when I was a kid and it was awesome. I’d ask him what he thinks about people.

Tricia: I would have a duck who lived in the sink (I don’t know why, but I’ve always wanted one). I’d probably ask him what he thinks about when he’s swimming around.

Tricia: My favorite color changes with each season in life, and right now it’s a deep, bold, bright blue. It smells like new life, like the breeze after a rain.

Cody: Right now, my favorite color is the blue-grey of the ocean at sunset and how it’s always recombining, changing tones, inventing new shades as the light moves. It smells like saltwater and oily driftwood bonfires.

Cody: This has to be Deschutes National Forest for me. We were camped outside Bend, Oregon, in a pine forest that felt incredibly familiar compared to the woods of Michigan I’d grown up in. It was also the first forest we’d camped in that spring since leaving the desert. I went out for a hike the morning after a rain and ended up in a grassy clearing. As my folding shovel sliced through the soft earth, I watched the sun come out, burning off the dew as the squirrels and birds got their day started.

Tricia: For me, it has to be a dry lake bed in California. It was early morning before anyone was awake, the air was still cool, the sun was just rising over the mountains in the distance. The colors were incredible–pink, purple, blue, and gold, with white plane trails looking like fireworks in the sky.

Harvey is an ’87 Toyota Travelmaster. We picture him as a cranky old man who does what he wants. He’s a little bent and scarred, but he’s earned some great stories because of it. We’ve replaced just about everything there is to replace on him, and there’s nowhere we wouldn’t take him (except NYC or into a parking garage).