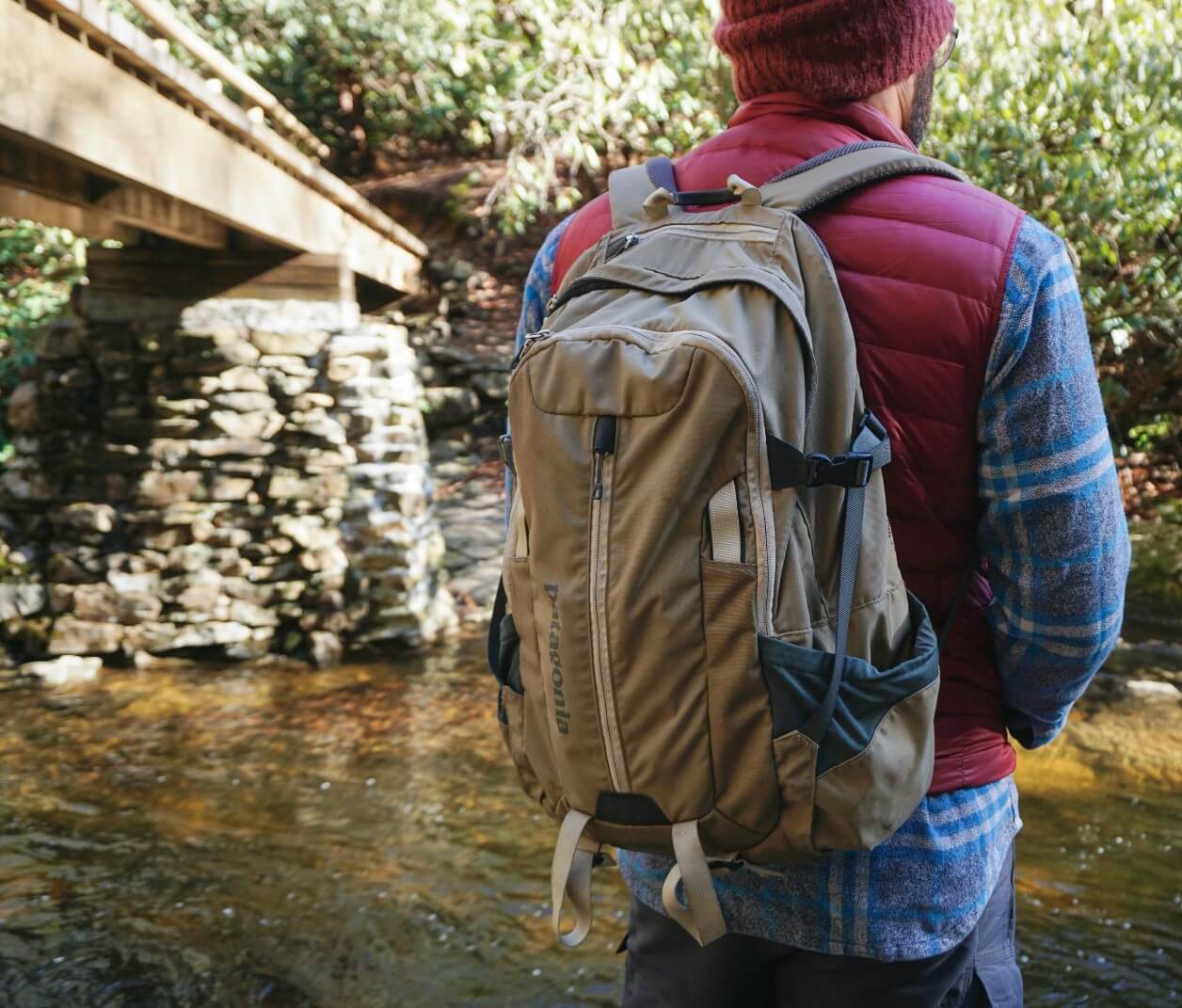 Jessica and I have been rocking the Patagonia Fuego 32L and the Refugio 28L backpacks for 3 years on the road now and we have been pretty impressed with their quality and longevity.

Let’s talk first about their styling. I’m a big fan of Patagonia’s logo. That typeface they use is tits. And placement of it on these bags is probably my favorite thing aesthetically about these bags. The color of the Fuego is a little jarring but I think it’s unique and the secondary colors compliment the bag well. I rock the Refugio 28L bag and love the desert tan color on it. Whenever I buy a piece of gear, I like for it to look “tactical” but not military-esque. The Refugio is a nice balance between tactical and civilian styling.

We bought our bags from Mast General in Banner Elk, North Carolina. The Fuego 32L is no longer made by Patagonia but the Refugio 28L is. The Refugio is priced at anywhere from $89-$129 but I think I paid a little over a $100 three years ago. The Fuego is still sold in some recesses of the internet for $89. When we bought these bags, it was the most we’d ever spent on any backpack but we liked the styling and they fit all the gear we needed to carry in them.

We use these bags as our mobile office. The Fuego fit the old 17” MacBook Pro which is what Jessica used before switching to the newer 15” and I’ve always used a 15” computer. The computers fit comfortably in the bag with enough space for a full keyboard, notepads, sketchbooks, some hard drives, a laptop charger, and the other little knick knacks we carry with us like pens, pills and books.

Most things Patagonia makes are high quality and these bags are no exception. We have been impressed with their sturdiness. They’ve held up to three years of being tossed back and forth in the van, we’ve taken them in the rain (they are not waterproof), we’ve spilled stuff on them, Linus has peed on one and they clean up easy and continue to work well for us. The only gripe I have is that the grips on the zipper fail from time to time. Other than that we have no complaints.

In our view the bags are pricey. I know Patagonia prices “social responsibility” into their products. If you’re into companies that are “fair trade” and spend a bunch of money on eco-mentalism, then you probably won’t mind paying the extra dollars when buying from such a “progressive” company. Though we like that Patagonia is moving away from using real wool in some of their other products, we could really care less about some of their other initiatives like their commitment to “fair trade.” So, paying the extra money for their vision of the world is off putting, but we pay it because their gear is well constructed, aesthetically well considered and their logo is awesome.

Ha! Classic I never saw this. I will say, the Fair Trade is pretty rad. And, in lieu of your video on perspective, I think important to think of folks who work in some pretty shitty work environments making the stuff that we buy without much thought of. I’ve been working with Patagonia closely for 15 years. Even being as close to them as I have been (where it is easy to see the cracks in the walls), they are truly and totally an inspiring brand. When we do athlete product testing, they don’t water shit down. They make what… Read more »

Hey Rod, thanks for reading and leaving a comment. I appreciate the link. I’ve read extensively on Fair Trade practices and the link you left is one I read before I posted my comments in the article above. When I mention changing perspectives in our video and elsewhere that comment includes attempting to see not just the “seen” in economic interactions (everything in that Patagonia piece on Fair Trade falls into that category) but also the “unseen” which includes a long list of boring economics on why protectionism/mercantilism are a net negative overall. Fair trade, buy local, even minimum wages… Read more »