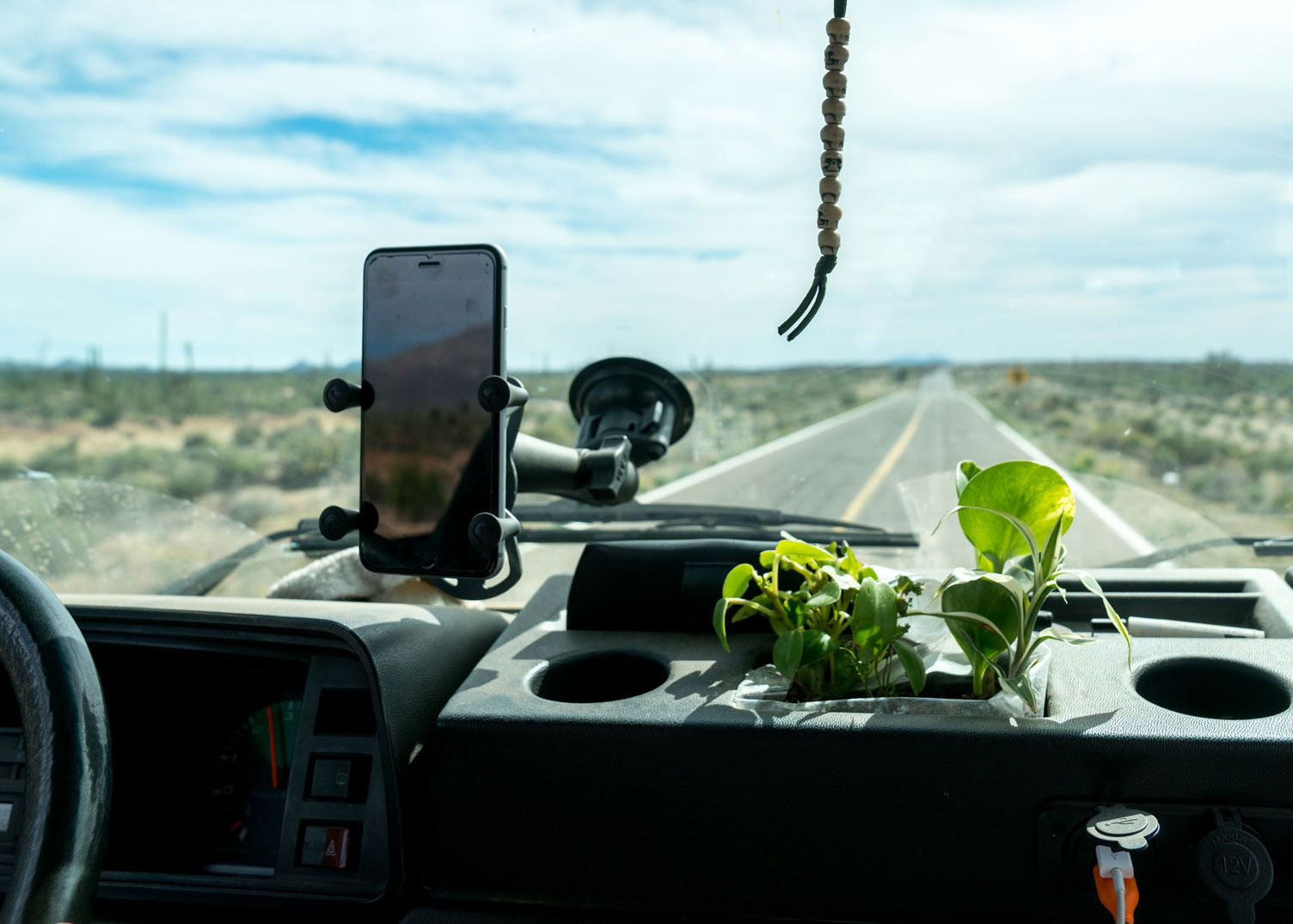 The Ram Mount system we bought is designed to be a heavy duty, kick-ass, Macho Man Randy Savage, cream of the crop, Device Holder. Ours mount via the RAM Twist Lock suction cup to our windshield and using the RAM Long Socket Arm attached to the RAM Universal X-Grip Cell Phone Holder it holds our iPhone 6s Plus like a boss.

We initially bought the RAM X-Grip III Universal Clamping Cradle for our iPad but the suction cup wouldn’t stay attached to our windshield and because of the length of the long socket arm, the iPad was just too bouncy in there. I think the reason the suction cup failed is because we have tint on our windshield and I believe that made the surface less conducive to suction as other suction mounted accessories we have seem to have the same issue.

You can buy this set up from our homies at Mule Expedition Outfitters or via Amazon.

The DJI Osmo One

As I stated above, this mount system is kick-ass. It’s very well made, tough, aesthetically spartan, and functional. We’ve had the cheap gas station Shit-Mounts™ before and they lasted all of a month before disintegrating into a heap of useless plastic bits. The RAM mount has lasted us 9 months so far and we’ve done some serious pounding off-road and it has stood up to the constant vibrations and impacts of everyday life in the van.

One of my favorite things about it is, if it happens to fall, the twist lock suction cup is easy to reapply. Ingenious little invention that. The X-Grip is also really strong. Our device simply doesn’t move when it’s clamped in that grip. I do want to point out that removing the device from its mount one handed is damn near impossible because the device will inevitably fall to the floor. Another thing is that while the X-Grip is stronger than Macho Man Randy Savage snapping into a Slim Jim, it seems that the iPad grip needs more spinach. We had our iPad fall out of the grip on a few occasions when the iPad wasn’t pulling the entire mount off of the windshield. That being said, it works great with the iPad when we are laying down in our bed in the back and want to watch a movie. Just attach the system to one of the rear windows, install the iPad mount and start watching a movie. As long as the van isn’t moving, the mount stays put with the iPad mounted.

For our whole set up we paid $158 and change. Yeah, it’s pricey but it has yet to break and it works. We probably shouldn’t have purchased the iPad mount which would’ve saved us $68 but hey, we look at it as our flat screen TV mount.