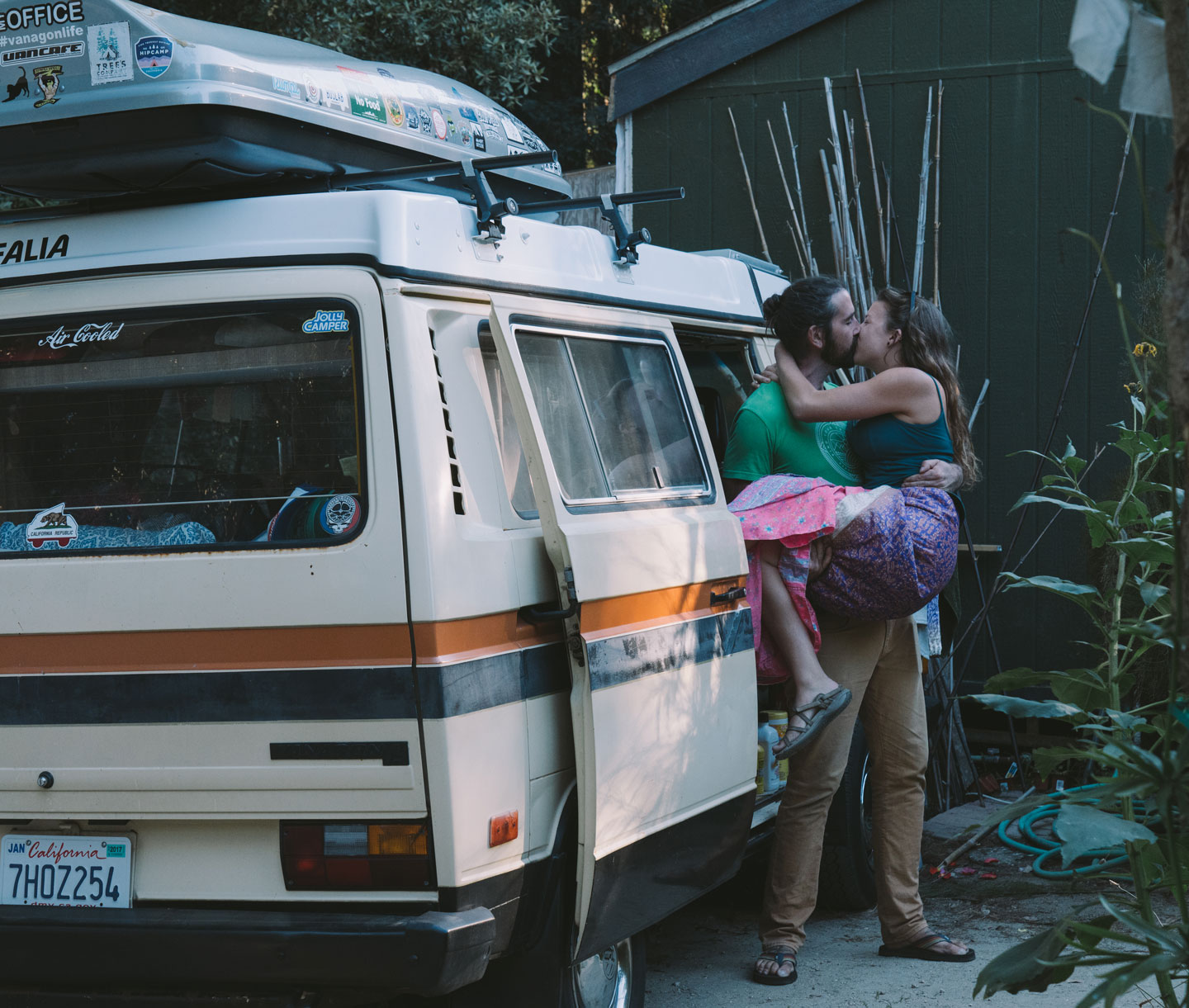 The first time we met Hawk and Kenz we were outside a grocery store and the two of them just walked right up to us and gave us huge hugs. From then on, it was like we were brothers-from-another-mother/sisters-from-another-mister. Hanging with these two is like being on roller coaster of giggles and tickles. I’ll stop right there before this gets any creepier and let you read the interview we did with them a while ago.

P.S. They have an Etsy shop where they sell all their rad handmade vanlife gear if you want to check it out!

Hi! We are Hawk and Kenz of VanOfMyDreams. We are from the foothills of Northern California, and have been living in our VW Westy for over 3 years.

Hawk: For me, the toughest thing I’ve faced on the road is feeling financially independent. With this lifestyle comes uncertainty, and I’ve felt like the odd jobs and opportunities that have come our way keep us moving, but I’m beginning to crave more steady income.

Kenz: For me, the toughest situation I’ve faced are my moon cycles each month. This topic doesn’t get brought up much on blogs, or interviews but alas us women cannot escape it.

Holy crap, that’s a tough question! This has been the most fun summer of our entire lives, its hard to think of a single funny incident. We’ve been to so many festivals, meet-ups, camp-outs, and events that keep us smiling and laughing all the time. We absolutely LOVE serendipitous unplanned van-friend sightings, which happen from time to time. We also love the uncontrollable laughter that comes with staying up too late with festival friends.

We would want to live in Santa Cruz, California if we stopped roaming in the van. The whole Monterey Bay area has long captivated my (Hawk’s) heart since I attended college at California State University Monterey Bay. The chill vibe, the hippies, the artistic and musically creative community – Santa Cruz just crushes it.

Generally, its clueless human beings. Especially the ones that have NO idea just how clueless they really are. This is a tough one to describe in words, but there are just some people out there completely ‘in it’ for themselves. We are big on community and communication – and wish the world was with us. My (Hawk’s) Mom always said however, that ‘people are usually doing the best they can with what they know.’ Which I’m not sure comforts me either. We try to stay open and hold space for people – and then we choose who we want to spend our time with carefully.

One of our favorite quotes for the last year or so has been from our great friend Scott Phillips. After we met him and his love at Lightning in a Bottle 3 years ago, we got to reconnect again in Santa Cruz. This one simple sentence changed the way I think (or overthink) about things – he said: “You’re a grown-up, do whatever the fuck you want.” We’ve tried to honor Scott’s sage wisdom since that day. And to be fair, he did preface by saying to be kind in all you do.

We would, without a doubt, have a talking male golden retriever. He would be wise AF, and tell us the long-held secrets of the dog world. Does he see color? Is our 7 year dog-year equation off? We would ask him things like, “What did your wolf ancestors pass down to your domesticated brethren?” To which, Gregory (we’ll call him for feeling) will reply: “You’re a dog, which is God backwards – do whatever the fuck you want.”

My favorite color is a prismatic rainbow! It smells like mama Gaia’s teat milk. -Kenz

And my favorite color is lime because it smells like green. -Hawk

It’s a coin toss between shitting in a lush green valley of mountains, under a wise old oak, while wilderness camping in the Los Padres National Forest – or deucing right along the famously scenic winding cliffs of Highway 1 in Big Sur.

Our van, Betsy Vanessa, is a mechanically sexy lady. She is a completely stock 1980 Volkswagen Vanagon Westfalia – and one of the first 6000 Vanagons ever made. She also happens to be an air-cooled, fuel-injected, 2.0 liter California model. Attractive stripes adorn her sides and rear, and black accent pieces complete her 80’s look. We’ve added modern upgrades like an additional battery, a solar panel system, a modern refrigerator, and psychedelic LED party lights. She’s a pretty special girl.